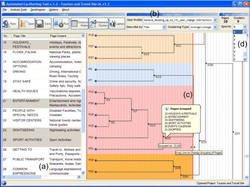 The Automated Card Sorting tool (AutoCardSorter) is an automated tool that supports the design and evaluation of the information architecture of information-rich applications, like most Web sites.  AutoCardSorter is inspired by the Card Sorting user method and employs semantic similarity measures (e.g. Latent Semantic Analysis - LSA)) to calculate the semantic similarity of different Web pages and clustering algorithms (e.g. Hierarchical Clustering Algorithms)  to cluster accordingly the information space.  The tool also implements statistically-based heuristics (e.g. Elbow Criterion) to support the user in determining the number of categories.

AutoCardSorter is aimed at providing the necessary flexibility and efficiency to the practitioners to design or evaluate the information architecture of a web site. Such an automated approach could substantially accelerate the design and evaluation lifecycle, by providing valuable insight and increasing the possibility to explore alternative designs for the structure of a web site.Other benefits include the support to non-technical content creators and multi-audience sites. 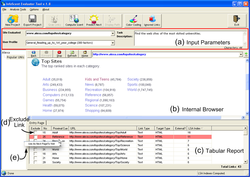 The InfoScent Evaluator (ISEtool) is a semi-automated tool developed by the HCI Group of the University of Patras. The aim of the tool is to facilitate the identification of navigability and findability impasses in the user's interaction with a Web site. ISETool evaluates the semantic appropriateness of the hyperlinksʼ descriptions presented in a Web site based upon Information Foraging Theory, and using semantic similarity measures (e.g. Latent Semantic Analysis - LSA) to exploit computationally the theoretical model.

ISETool can be used in the early phases of design to explore 'what-if' scenarios but also supports formative usability evaluations, reducing the need to involve actual users, which is costly and time-consuming. 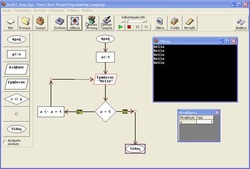 In this learning environment, the algorithms are developed in the form of a flowchart, and consequently the program implementation process occurs in a visual way. Research has shown the learning effectiveness of visual representations of an algorithm (Cunniff and Taylor, 1987, Scanlan, 1989), specifically if the learners are in the introductory stages of a programming course. The program follows the typical design conventions of a direct manipulation application such as menus, toolbars and buttons. The student can select flowchart objects, presented on the left side of the screen, drag them to the workspace and connect them (see Figure). A representative screenshot of the learning environment is presented in the Figure . In the upper part of the screen, a toolbar containing the commands the user needs in order to run the algorithm, is found.
The VFC provides the facility of saving an algorithm in a form that can be “called” from another algorithm as well as from itself, thus supporting the function and recursiveness concept respectively. A function to create an executable file that allows the autonomous implementation of an algorithm without the requirement of the environment is also present. Moreover, the ability to change the delay of each step of the implementation is given. In case that the longest possible delay is selected the algorithm is practically executed step to step, and the program’s execution is paused until the students presses the corresponding key (play). In addition, various representative algorithms are available as examples, giving the opportunity to the user to experiment with them. Finally, the user can observe the current values of selected variables and the memory stack while the algorithm is executed. 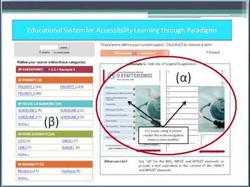 ESALP is a web-based application that is meant to be used as a tool to disseminate and teach Web accessibility guidelines and good design practices. The tool adopts an example-based learning approach. First, it exposes people to the accessibility impasses that arise when certain, established guidelines are violated, and then provides concise advice on how to avoid or resolve them. The tool is addressed to Web practitioners as well as students and professors in departments with web design courses. The current version of the tool presents examples of violations for all the WCAG v1.0 accessibility guidelines. These examples were derived from an in-depth, Web accessibility evaluation study of 50 Greek websites. 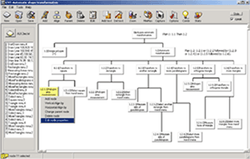 The effort required to construct a task model and to maintain various instances of it is one of the main reasons discouraging the wider adoption of task modeling (Kieras, 1996). This finding inspired us to develop appropriate tool, the Cognitive Modeling Tool (CMT).

CMT has been developed to facilitate the task modeling process. Task models are structured in a hierarchical way, (see figure). CMT uses a direct manipulation approach for editing and modifying this task hierarchy. Any specific node represents a task relating to a user goal. The sub-tasks which serve to accomplish this goal are associated to the node. These subtasks can be related through a specific plan involving OR, AND logic operators. This plan is usually shown next to the specific high-level goal. Additional information relating to comments on the goal accomplishment can be attached to the node.

An individual user task model can be annotated with comments relating to task execution. A special notation has been defined, extending the HTA plan notation (Shepherd, 1989), with tokens referring to user deviation from expected task execution. So token (!) marks a non-destructive syntactic deviation, while (x!) marks a not-completed task execution. Also introduction of new unforeseen tasks in a plan by a user are marked as {task-id}, as shown in the figure below. 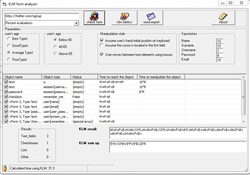 To further evaluate the validity of the Keystroke Level Model (KLM), the design and validation of a tool to automatically evaluate web form filling tasks is proposed. The tool is characterized by simplicity and can automatically carry out Keystroke Level Model symbolic calculations of the time required to fill a specific web form. Moreover, it calculates the time required for alternative types of interaction (such as using tab to move across the elements of the user interface) and/or different users’ characteristics (such as age and expertise on typing).

The tool is under development, and at the moment a functional and stable version is available at http://klmformanalyzer.weebly.com/ (see Figure).

A typical usage scenario is the following:
1. Initially, the evaluator types the url of the web page form to be evaluated, or selects a previously evaluated pages from the history listbox.
2. Subsequently (or before the 1st step), the evaluator selects parameters related to user’s age, typing ability and hypotheses related to the type of interaction: For instance, whether the modeled user’s hand initial position is on keyboard or not or whether the user moves across form elements using mouse (or the tab key). Moreover, the evaluator
3. The tool parses automatically the elements of the web form and fills accordingly a list view with the type of the element, its name and carries out the KLM’s symbolic calculation of the time to reach the object as well as to manipulate it (for instance to write down a username).
4. Finally, the total KLM result is provided by aggregating the operators (H,P,M,B,K). The calculation time is also provided.